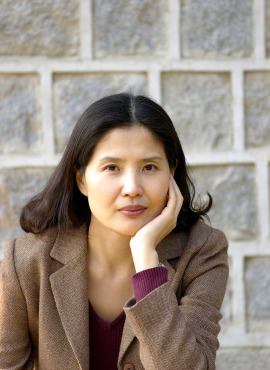 Choi Young-Mi is a poet and novelist from the Republic of Korea. She is widely known for her poetry collection, At Thirty, the Party was Over (서른, 잔치는 끝났다)”, and is one of the defining figures who ignited the #MeToo movement in Korea.

Born in Seoul, Korea in 1961, she received her B.A. in Western History from Seoul National University and an M.A. in Art History from Hong-ik University. Faced with the military dictatorship of the 1980's, she participated in student protests demanding democracy, resulting in her detainment for 10 days and suspension from her university for a year.

Choi Young-mi was one of a secretive group of translators who dared to translate Karl Marx's Capital for the first time after the Korean War, publishing her work under a pseudonym in 1987.

Her first volume of poems, “At Thirty, the Party was Over (1994),” came as a shock to both the literary world and to Korean society due to her delicate but bold expressions, lively metaphors, and piercing satire on capital and authority. Today,“At Thirty, the Party was Over” has sold over half a million copies. Most notably, her poem “In Sun-un Temple” has received nationwide praise and been included in high school textbooks and sung by many different singers.
*
Choi is the author of six poetry collections:
Treading on The Pedals of Dreams (1998), To The Pigs (2005), Life that has yet to Arrive (2009), Things Already Hot (2013) and What will not come again (2019), which includes the poem “Monster” among other #Metoo poems.

Choi received the Isu Literary Award for To the Pigs in 2006, and her fifth volume of poems, Things Already Hot, was selected as the Book Culture Foundation's Literary Book of Excellence in 2013.
With her first novel, Scars and Patterns, Choi transformed into a novelist, going on to author Bronze Garden and Melancholy of the Era, a collection of essays, among other works.
Choi has also translated“Francis Bacon in Conversation with Michel Archimbaud” (1998) and “D’Aulaires’ Book of Greek Myths”(1999) into Korean.

Choi Young-Mi has taught creative writing in poetry at Inha University and Kangwon National University. Her work has been included in high school textbooks, and some of her poems have been rewritten as songs.
In 2011, Choi was appointed as an honorary ambassador for the Korean National Assembly Library and was active as a board member for the Korea Football Association's Football Love Sharing Foundation from 2012 to 2013.

In 2017, Choi Young-Mi was requested by a magazine editor to write poems on feminism and gender inequality. In response, she wrote the poem "Monster" (괴물), exposing the sexual harassment and abuse committed by the old poet En. When her poem "Monster" was released, the public immediately recognized 'En' as Ko (the most revered Korean poet), igniting the #Me Too movement.
Choi Young-Mi's revelation of Ko's molestation played a major role in exposing the sexual harassment and assault which infests all of Korean society, not just the cultural and arts community, and her contributions continue to help eradicate offenders. For her contributions, the Metropolitan City of Seoul honored Choi Young-Mi with the Sex Equality Award in 2018.

In the summer of 2018, Poet Ko attempted to sue Choi for defamation. However, the Seoul Central District Court (Feb. 15, 2019) sided with Choi, saying her allegations of sexual harassment were credible. The court said her testimony was "consistent and specific" and that there was "little reason to doubt the veracity of her claims." 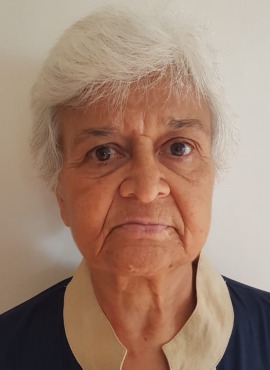 Bhasin is associated with Sangat-A Feminist Network, Jagori Resource and Training Centre, New Delhi, and Jagori Rural Charitable Trust. Her main work has been capacity building of feminist activists, networking and campaigning. She is the Global Co-Chair of Peace Women Across the Globe. She has received high praise for her poem entitled Kyunki main ladki hoon, mujhe padhna hai ( Because I am a girl I must study) her other feminist works and children's books, some of which have been translated into nearly 30 languages, Additionally, Bhasin is the South Asia Coordinator of One Billion Rising, a global campaign dedicated to ending rape and sexual violence against women. 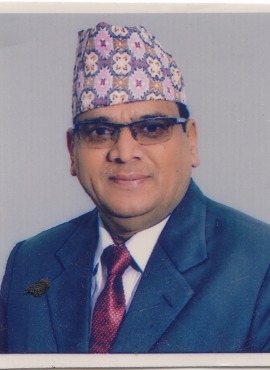 Deependra Kafle is Secretary of Nepal’s National Women’s Commission. He has served as the Under Secretary of Ministry of Health and Population and Joint Secretary of Ministry of Education. Joining the civil service in 1987, over three decades of his career he has held a variety of positions and has chaired a number of interaction programs and meetings and delivered statements at different programs organized by various institutions related to women and girls. 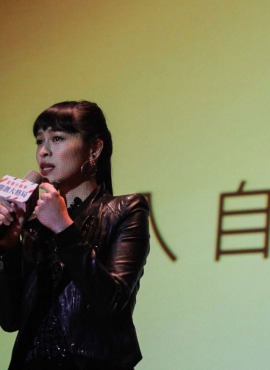 Wei Shuan Chang is the founder and CEO of Womany Media Group. She is regarded as the key opinion leader in women leadership and entrepreneurship in Asia. She has been invited by the U.S. Department of State to attend International Visitor Leadership Program and participated in APEC meetings.

Wei Shuan Chang is considered as the top 20 influential women in Taiwan by Digi Times. She has been leading the very first popular gender oriented media community in Asia, and starting the conversation about gender and women issues across boarders for years. She is also a writer, a TED speaker, and a host. 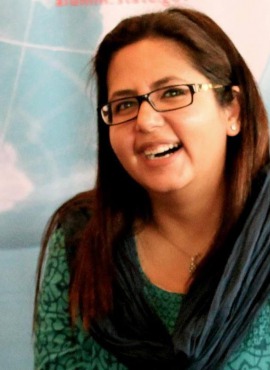 Karuna Nain is Global Safety Policy Lead at Facebook based in Menlo Park, California where she is responsible for working with internal and external stakeholders on issues of child online safety and well-being, women's safety, and suicide prevention. In her past six years at Facebook, Karuna has developed Facebook’s Safety Center, Bullying Prevention Hub, Parents Portal, Youth Portal and Digital Literacy Library and led the global expansion of the company’s suicide prevention resources and the pilot program for victims to proactively report non-consensually shared intimate images.

Prior to this role, Karuna was based out of the Facebook India office where she spearheaded programs on online safety for teens and women. She previously worked at the U.S. Embassy in New Delhi where she served as Cultural Affairs Specialist in the Public Affairs Section. During her tenure, she was responsible for successfully developing and maintaining the outreach strategy for U.S. Government exchange program alumni in India and Bhutan. Prior to joining the U.S. Embassy, Karuna worked as Senior Analyst in Ernst & Young. She started her career in media with India’s first 24x7 news channel, NDTV in 2003 and also worked at German Broadcaster Deutsche Welle in Bonn in 2006. Karuna is a graduate of St. Stephen’s College, University of Delhi, and has completed her post-graduate studies, specializing in globalization studies and international relations, from Albert Ludwigs University, Freiburg, Germany; University of KwaZulu Natal, Durban, South Africa and Jawaharlal Nehru University, Delhi, India. She received a German Academic Exchange Service (DAAD) scholarship for her Masters studies. Karuna also serves on the board of an Indian non-profit, Happy Hands Foundation that focuses on revitalizing traditional arts and making them sustainable. 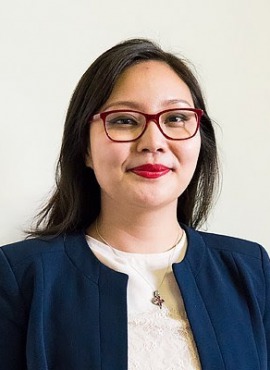 Naoko Maruyama is the Regional Coordinator for East, Southeast, and South Asia of the Vatican’s Migrants and Refugees Section. She has a Master’s Degree in Migration and Development and a Bachelor’s Degree in International Relations. Having lived and studied in nine countries across four continents, her exposure to various multicultural and multilingual environments has driven her passion and enthusiasm to work with people of all backgrounds, particularly those most vulnerable in society. Her studies and experience inspired her to work with migrants, refugees, victims of human trafficking,
and all people on the move. 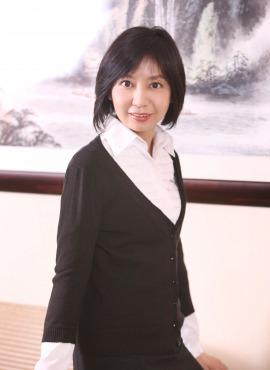 Ruth Chingju Lee is Head of Corporate Sustainability, HSBC Bank (Taiwan) Limited. She reports to the HSBC Asia Pacific Regional Head of Corporate Sustainability as well as the President & Chief Executive Officer of HSBC Bank (Taiwan) Limited. Ruth joined HSBC since 2008 and responsible for community investment project, charitable donation and employee volunteering programme. For the past 11 years, Ruth has devoted her efforts to the areas of environmental conservations and eudcation, financial education, employability related programmes for deprived youth and supporting women and their children suffered domestic violence. With closely partnership with a number of non-profit organisations, Ruth continues to deliver successful and diverse community investment programmes in Taiwan and help HSBC Bank (Taiwan) Limited win the flagship CSR award, “Excellence in Corporate Social Responsibility Award” by CommonWealth Magazine for nine consecutive years from 2010. 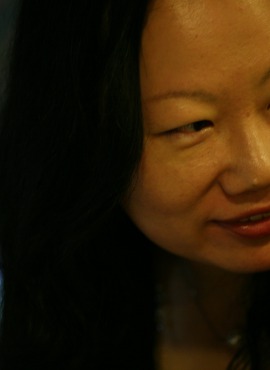 HO Chao-ti is a producer and director of documentary films. For several years she has made motion pictures centered on marginalized communities and non-mainstream issues, such as the impact of globalization and contemporary cultural hybridity. In addition to her work as an independent filmmaker, she was production director for the Taipei office of CNEX Foundation.

Distinguished by a unique vision, Ho Chao-ti’s works have been featured in international film festivals in Europe, North America and Asia, receiving numerous awards. Her rich and complex cinematic vocabulary stirs the heart with an approach that is both gentle and trenchant. In recognition of her works’ artistic nature, one of her films has been screened at the Museum of Modern Art in New York. In recent years she has released a series of documentaries on international issues, to wide acclaim. Her work in progress received grant from the Sundance Institute Documentary Film Program. She is the first Taiwanese director to receive this honor. 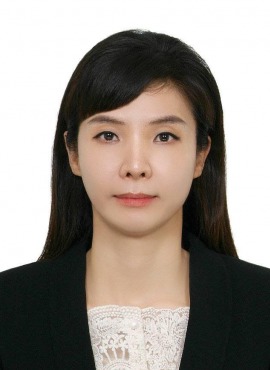 As a prosecutor, she testified about the sexual abuse she suffered on live tv news in January 2018. The unheard of interview made whole south korean society shocked and countless women testify against sexual abuse.