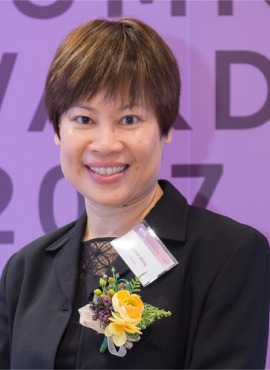 Ms. Linda S. Y. Wong is the Executive Director of the Association Concerning Sexual Violence Against Women (ACSVAW). She has respectively obtained a Bachelor Degree in Social Work at Hong Kong Baptist University, a Master Degree in Women’s Studies at the University of Kent, UK, and a Master Degree in Counselling at HKU. Apart from being a co-founder of the Association in 1997, her frontline experience on working with victim-survivors of sexual and gender-based violence has prompted Ms. Wong and fellow professionals to set up ‘RainLily’ in 2000, the first sexual violence crisis centre in Hong Kong..

In February, 2007, Ms. Wong was appointed the Executive Director of the Association. At present, she is responsible for the overall direction and external liaison of the Association. Ms. Wong has worked in the women’s field for more than two decades. She has rich experiences in advocacy work in issues facing women. 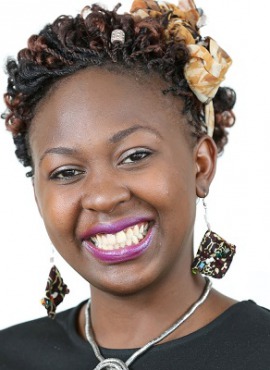 Nafula is a fierce advocate for gender equality and human rights and is passionate about Pan-Africanism and social justice. She is currently the Vice Chairperson for Policy and Advocacy at the Commonwealth Youth Council. She is also the programs director at Brydges Centre , an organization that provides child rescue and protection services, education and economic empowerment to at-risk youth and out-of-school girls. She is an activist having successfully led actions and petitions addressing sexist advertising and gender based violence and is an active contributor to the blog 'African Feminism'. Her consultancy expertise is on gender based violence prevention and intervention, gender mainstreaming, advocacy and youth participation.
Nafula is an East Africa Acumen Fellow (2015), Laureate Global Fellow(2015), a Spark Kenya Changemaker (2015), Common Purpose Fellow (2016) and an Associate Fellow of the Royal Commonwealth Society. She is also a founding member of the Commonwealth Youth, Gender and Equality Network (CYGEN) and an executive board member of the Commonwealth Businesswomen Network. She holds a law degree from Jomo Kenyatta University of Agriculture and Technology. 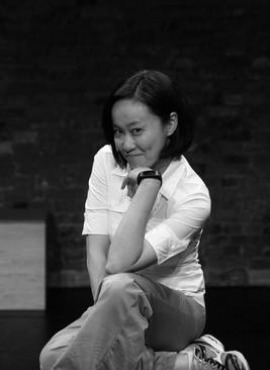 Job Title：
-Artist director at Even Near Playback Theatre
-Drama therapist at The Garden of Hope Foundation
-Lecturer at The PsyGarden Publishing Company
-Lecturer at LTS (Little Heart Theatre School)
Areas of Expertise：
1) Playback Theatre training includes core training, applications of trauma related issues, artistic performance and moderator skills.
2) Applications in the field of drama therapy include inner clown theatre training, storyteller training and developmental transformations drama therapy.
Education:
2003 Master of Drama Therapy at Hertfordshire University in U.K. 2008 Graduated from the Centre of Playback Theatre in the U.S.
2011 Graduated from International School of storytelling training in UK.
2017 Graduated from the U.S. Developmental Transformations Drama Therapy study program L1
Dramatic works:
2015~2018 “Shi Di” - as director of gender issues at The Garden of Hope Foundation.
2006~2014 “The Vagina Monologues” - as director of V Day at The Garden of Hope Foundation.
2004~2018 “Playback Theatre” – as actress and moderator at Even Near Playback Theatre
2009~2011 “The world of seen and unseen” – as director of six sense blind performance at Guling Street Avant-Garde Theatre.
2009 "Clown Playback" - as director and actress at Taipei Fringe Festival
- Actress in the play of "Break into the ruins" at Assignment Theatre
- Actress in the play of "Wanna Men" at Taiwan Haibizi Theatre
- Actress in the play of "Balcony" by Approaching Theatre Group at National Theatre Experimental Venue
- Actress in the play of "Little Baby Owl" at SONG SONG SONG Children's & Puppet Theatre
Publishing dramatic works：
-"Improvising Real Life "translated edition published by Psychological Publishing Co., Ltd.
Script of "The Vagina Monologue" translated edition published by The PsyGarden Publishing Company 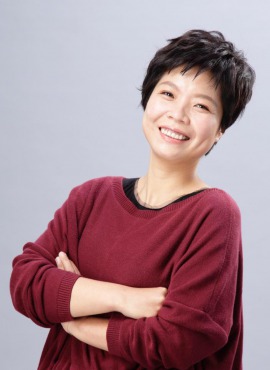 Being the very first female umpire in Taiwan, Liu Po Chun (or Sophia Liu) faced discrimination and was even kicked out from the field. After she completed umpire training, she was told there was no equipment for her. A fortunate stint as an interpreter with the New York Yankees changed that: They heard her story and donated all the equipment she needed. Since 2006, Liu has umpired for World Baseball and Softball Confederation (WBSC) tournaments in Venezuela, South Korea, Hong Kong and USA. As a gender equality advocate in sports, she co-founded Taiwan Women's Baseball Advocate Association (TWBAA) to encourage women to participate in baseball games. Starting from scratch, she has organized international women baseball friendly games, designed curriculum for umpire training by fundraising own her own. Later, she started a group at social media with these female umpires in Asia. Meanwhile, she is also a social worker with single mothers in The Garden of Hope Foundation.

The story of Sophia inspired 2 movies: the documentary ‘She is an Umpire’ and the fictional work ‘The Busy Young Psychic’, based on her experience as a medium when she was a High School student. It later became a TV series (‘The Teenage Psychic’, first HBO Asia series in the Chinese language). She has also published five books about her experiences.

She is now known as “The Mother of Women’s Baseball” in Taiwan. With the honor of 2019 IOC Women and Sport Awards in UN, she continues to encourage and empower more girls through sports. 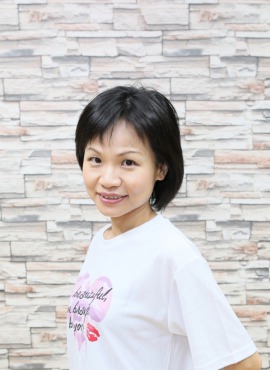 Kaili Lee (李凱莉) currently serves as the Director of GOH-Migrants for Garden of Hope Foundation, one of Taiwan's largest NGOs. She engages in the trafficking victim assistance programs, policy advocacy, law amendment and inter-agency coordination at the local and national level.

Kaili develops and delivers the training and technical assistance to the law enforcement, government entities and NGOs on the migrant and anti-trafficking issue nationwide. She also makes an effort to lead the innovation, converting the local shelter into GOH-Migrants in 3 years, upholding the rights and dignity of migrants, and facilitating the international partnership for the migrants as well.

Kaili received Master degrees in Sociology and Divinity, which led her to fight for human rights and advocate for peace for many years. 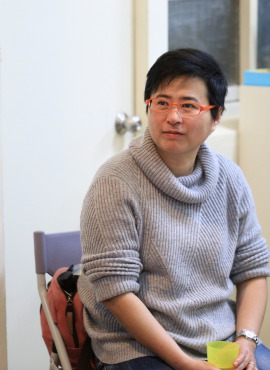 Victoria Hsu is an attorney-at-law; she is the co-founder and executive director of the Taiwan Alliance to Promote Civil Partnership Rights(TAPCPR). Her team represented LGBT pioneer Chi Chia-wei in the marriage equality case that Taiwan’s Constitutional Court ruled in favor of in 2017. The Grand Justices gave the government two years to pass legislation and it successfully led to the passage of a same-sex marriage law in Taiwan in May 2019. Victoria and her wife, Chih-chieh Chien (Secretary General of TAPCPR), registered their marriage on 24 May 2019 at the same office that rejected their attempt to marry five years ago.
Victoria is a PhD candidate in the Faculty of Law at Université Paris X (France) and has two Master of Law degrees from the Université Strasbourg III (France) and from National Taipei University (Taiwan). She was also an openly lesbian candidate in Taiwan’s 2016 legislative election. 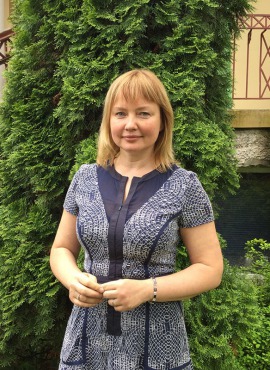 Pille Tsopp-Pagan is a Board President of Women Against Violence Europe (www.wave-network.org) She is board member and co-founder of the Tartu Women’s Shelter in 2002, which at the time was the first domestic violence shelter in the Baltics. For the past 8 years, she has served as its Executive Director, working to rebrand the organization as the Women’s Support and Information Center (WSIC), a more internationally-oriented organization that participates in policy analysis and advocacy, research and education. She is active human rights activist in Estonia. 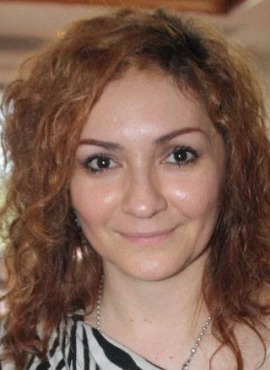 Margarita Guillé is a feminist Mexican activist founder of the first shelters in Mexico, in 1995. She has a multi-faceted career; developing shows and documentaries on social issues for radio and television, founding the magazine Mujer Contemporánea in 1993, she is co-funder of national and international organizations such as the Inter-American Shelter Network (2006), the Global Network of Women´s Shelters (2008), MUA, Women agents of change (2011). She had recognized as human rights deffender by the Pro Homine price of a Mexican Congress, and by Soroptimist International as feminist leader. 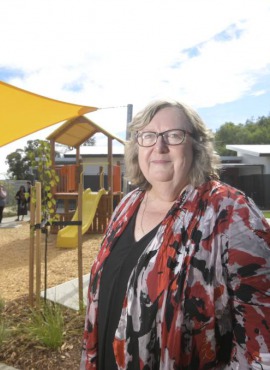 Julie Oberin is a member of the Global Network of Women’s Shelters, the National Chair of WESNET (Women’s Services Network), and a founding and current member of the Australian Women Against Violence Alliance (AWAVA). She is the Chief Executive Officer of Annie North Incorporated - a women’s refuge and domestic violence response service in regional Victoria, Australia. Julie has almost 30 year experience in providing services to women and children who experience domestic or family violence.