Time:
11/06/2019 - 09:30 to 11/06/2019 - 11:00
Room:
304b
Type:
Proposal(Workshop / Presentation)
Coordinating organization:
Lamlynti Chittara Neralu - represented by Jagori, North East Network and Visthar
Theme:
Emerging Issues
Language:
English
Organization Name:
Lamlynti Chittara Neralu - North East Network and Visthar （東北網絡與Visthar）
Proposer: Amrita
Describe your workshop/presentation (300-500 words):
This presentation will share emerging issues of and for ‘women’ survivors of violence in India, against the backdrop of multiple and intersecting forms of violence, and the range of services that they are entitled to. It traces these women’s journey from entry to exit in/from shelter homes, in search of a long-term redressal of issues they face. It is part of an action-research conducted by feminist and human rights groups that will eventually engage with both staff and residents of shelter homes, so as to collaboratively seek solutions to their concerns.

The intention of the presentation (as also the action-research it draws from) is to reimagine shelter homes as per feminist notions of empowerment. The conceptual aim is to frame homelessness as a structural issue and a socio-political process.

All Speakers:
Name:
Anurita Pathak Hazarika
Biography:
Anurita is currently Director, North East Network, a women’s rights organisation active in the states of Assam, Nagaland and Meghalaya in India. She has twenty years of experience in social and development activism with a special focus on women’s rights in north-east India. The focus areas of her work have been gender-based discrimination and violence against women, especially issues of domestic violence, witch hunting, sexual harassment of women at work place, women in conflict areas and women’s representation in public processes within a human rights and feminist perspective. She has worked as a spokesperson and trainer on violence against women, gender and women’s human rights. She is a resource person and consultant to government programmes , educational institutions, public institutions ,UN agencies, etc. in the state of Assam. Anurita has led and participated as a researcher in a number of studies related to women and violence. She has engaged and led research on issues of violence against women, and women’s leadership building. AT NEN, she is instrumental in building women’s leadership at grassroots levels by setting up women’s centre in villages which are recognised by both community and government .
Anurita has a Master’s from Gauhati University and attended a Women’s Human Rights course at the Lady Margaret Hall College, the University of Oxford. 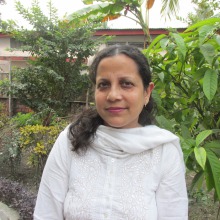 Slides: The presenters don't authorize the sharing or distributing of their presentation content.
You are using an outdated browser
For a better experience using this site, please upgrade to a modern web browser.